The vast majority of words in the Hebrew language can be boiled down to a three-consonant root word that contains the essence of the word's meaning. Even if you cannot read Hebrew, you will find that you can get some insight into the meaning of the Bible by identifying the roots of words. If the same Hebrew root is used in two different places, the words and their meanings are probably related. If you see the same English word in two different places but the corresponding Hebrew words have different roots, this may indicate that there is a different shade of meaning that the English is not reflecting.

A substantial amount of rabbinical interpretation of the Bible is derived from the relation between root words. For example, the rabbis concluded that G-d created women with greater intuition and understanding than men, because man was "formed" (yitzer, Gen. 2:7) while woman was "built" (yiben, Gen. 2:22). The root of "built," Beit-Nun-Hei, is very similar to the word "binah" (Beit-Yod-Nun-Hei), meaning understanding, insight or intuition.

Hebrew words are formed from roots by changing vowels and by adding a wealth of prefixes and suffixes to that root. Prefixes can be prepositions (in, on, of, to, etc.), articles (the), or other things. Suffixes can be pronouns (he, you, our, etc.), possessives ('s), or can indicate gender and number (female singular; male plural, etc.). Because of the way these prefixes and suffixes are added to the root, a single word in Hebrew might be translated into English as several words.

For example, the first word of the Torah, "bereishit," is usually translated as "in the beginning." The root is Reish-Alef-Shin, which means "head" or "first." (See Hebrew Alphabet to learn the letters). It is the same root as the "Rosh" in "Rosh Hashanah" (first of the year, i.e., Jewish New Year). We add the prefix Beit, a preposition meaning "in," "on," and a number of other things. The word "the" is implied.

A more complicated example is the Hebrew word "shehecheyanu," the name of a popular prayer recited on holidays and at other times. The single word "shehecheyanu" means "who has kept us alive." The root of this word is Cheit-Yod-Hei, a verb meaning "to live." It's the same root as the Hebrew word "chai" (life or living) which you commonly see on Jewish jewelry, and the Jewish toast "l'chayim!" (to life!) The Shin prefix turns the verb into a noun indicating a person who does the thing ("who"). The next letter is Hei, which normally turns a verb into a causative form ("has kept"). The Nun-Vav suffix is a first person plural pronoun ("us"). Thus, shehecheyanu means "who has kept us alive." Whew!

There are surprisingly few root words in biblical Hebrew, but we get a lot of mileage out of the ones we have. For example, from the root word Qof-Dalet-Shin, meaning "holy," "sacred" or "sanctified," we get kedushah (holiness), kiddush (a prayer over wine sanctifying Shabbat or a holiday), Kaddish (an important prayer commonly thought of as a mourning prayer), aron kodesh (holy cabinet - the place in synagogue where the Torah scrolls are kept), and kiddushin (betrothal).

Less obviously, from the root Samekh-Dalet-Reish, meaning "order," we get siddur (the daily prayer book, which sets for the order of prayers), seder (the Passover family ritual, which must be performed in a specified order) and sidrah (the weekly Torah reading, also called a parshah).

Here are some common prefixes and suffixes you will find on Hebrew words: 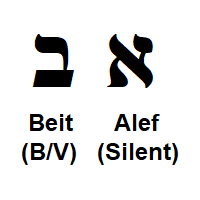 Hebrew Alphabet
See illustrations of the letters and vowel points of the Hebrew alphabet in print, script and Rashi script. Learn the names and numerical values of the letters. Also discusses transliteration (writing Hebrew in English letters).