According to Jewish tradition, G-d gave the Jewish people 613 mitzvot (commandments). All 613 of those mitzvot are equally sacred, equally binding and equally the word of G-d. All of these mitzvot are treated as equally important, because human beings, with our limited understanding of the universe, have no way of knowing which mitzvot are more important in the eyes of the Creator. Pirkei Avot, a book of the Mishnah, teaches "Be as meticulous in performing a 'minor' mitzvah as you are with a 'major' one, because you don't know what kind of reward you'll get for various mitzvot." It also says, "Run after the most 'minor' mitzvah as you would after the most 'important' and flee from transgression, because doing one mitzvah draws you into doing another, and doing one transgression draws you into doing another, and because the reward for a mitzvah is a mitzvah and the punishment for a transgression is a transgression." In other words, every mitzvah is important, because even the most seemingly trivial mitzvot draw you into a pattern of leading your life in accordance with the Creator's wishes, rather than in accordance with your own.

But what about the so-called "Ten Commandments," the words recorded in Exodus 20, the words that the Creator personally wrote on the two stone tablets that Moses brought down from Mount Sinai (Ex. 31:18), which Moses smashed upon seeing the idolatry of the golden calf (Ex. 32:19)? In the Torah, these words are never referred to as the Ten Commandments. In the Torah, they are called Aseret ha-D'varim (Ex. 34:28, Deut. 4:13 and Deut. 10:4). In rabbinical texts, they are referred to as Aseret ha-Dibrot. The words d'varim and dibrot come from the Hebrew root Dalet-Beit-Reish, meaning word, speak or thing; thus, the phrase is accurately translated as the Ten Sayings, the Ten Statements, the Ten Declarations, the Ten Words or even the Ten Things, but not as the Ten Commandments, which would be Aseret ha-Mitzvot.

The Aseret ha-Dibrot are not understood as individual mitzvot; rather, they are categories or classifications of mitzvot. Each of the 613 mitzvot can be subsumed under one of these ten categories, some in more obvious ways than others. For example, the mitzvah not to work on Shabbat rather obviously falls within the category of remembering the Sabbath day and keeping it holy. The mitzvah to fast on Yom Kippur fits into that category somewhat less obviously: all holidays are in some sense a Sabbath, and the category encompasses any mitzvah related to sacred time. The mitzvah not to stand aside while a person's life is in danger fits somewhat obviously into the category against murder. It is not particularly obvious, however, that the mitzvah not to embarrass a person fits within the category against murder: it causes the blood to drain from your face thereby shedding blood.

According to Judaism, the Aseret ha-Dibrot identify the following ten categories of mitzvot. Other religions divide this passage differently. See The "Ten Commandments" Controversy below. Please remember that these are categories of the 613 mitzvot, which according to Jewish tradition are binding only upon Jews. The only mitzvot binding upon gentiles are the seven Noahic commandments.

☰ The Two Tablets: Duties to G-d and Duties to People

You may have noticed, however, that the fifth category, which is included in the first tablet, is the category to honor father and mother, which would seem to concern relationships between people. The rabbis teach that our parents are our creators and stand in a relationship to us akin to our relationship to the Divine. Throughout Jewish liturgy, the Creator is referred to as Avinu Malkeinu, our Father, our King. Disrespect to our biological creators is not merely an affront to them; it is also an insult to the Creator of the Universe. Accordingly, honor of father and mother is included on the tablet of duties to G-d.

These two tablets are parallel and equal: duties to G-d are not more important than duties to people, nor are duties to people more important than duties to G-d. However, if one must choose between fulfilling an obligation to G-d and fulfilling an obligation to a person, or if one must prioritize them, Judaism teaches that the obligation to a person should be fulfilled first. This principle is supported by the story in Genesis 18, where Abraham is communing with G-d and interrupts this meeting to fulfill the mitzvah of providing hospitality to strangers (the three men who appear). The Talmud gives another example, disapproving of a man who, engrossed in prayer, would ignore the cries of a drowning man. When forced to choose between our duties to a person and our duties to G-d, we must pursue our duties to the person, because the person needs our help, but G-d does not need our help.

In the United States, a controversy has persisted for many years regarding the placement of the "Ten Commandments" in public schools and public buildings. But one critical question seems to have escaped most of the public dialog on the subject: Whose "Ten Commandments" should we post?

And once we decide on a list, what translation should we post? Should Judaism's sixth declaration be rendered as "Thou shalt not kill" as in the popular KJV translation, or as "Thou shalt not murder," which is a bit closer to the connotations of the original Hebrew though still not entirely accurate?

These may seem like trivial differences to some, but they are serious issues to those of us who take these words seriously. When a government agency chooses one version over another, it implicitly chooses one religion over another, something that the First Amendment prohibits. This is the heart of the controversy.

But there is an additional aspect of this controversy that is of concern from a Jewish perspective. In Talmudic times, the rabbis consciously made a decision to exclude daily recitation of the Aseret ha-Dibrot from the liturgy because excessive emphasis on these statements might lead people to mistakenly believe that these were the only mitzvot or the most important mitzvot, and neglect the full 613 (Talmud Berakhot 12a). By posting these words prominently and referring to them as "The Ten Commandments," (as if there weren't any others, which is what many people think) schools and public buildings may be teaching a message that Judaism specifically and consciously rejected. 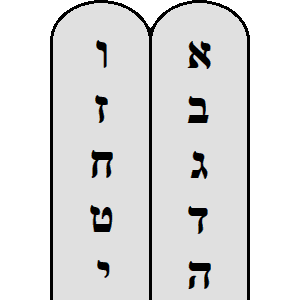 The Seven Laws of Noah
Learn about the seven commandments that G-d gave Noah, which are the only ones that Judaism considers to be binding on all people, because all people are descended from Noah.