When you come to the land and you plant any tree, you shall treat its fruit as forbidden; for three years it will be forbidden and not eaten. In the fourth year, all of its fruit shall be sanctified to praise the L-RD. In the fifth year, you may eat its fruit. (Leviticus 19:23-25)

There are four new years... the first of Shevat is the new year for trees according to the ruling of Beit Shammai; Beit Hillel, however, places it on the fifteenth of that month. (Mishnah Rosh Hashanah 1:1)

Tu B'Shevat, the 15th day of the Jewish month of Shevat, is a holiday also known as the New Year for Trees. The word "Tu" is not really a word; it is the number 15 in Hebrew, as if you were to call the Fourth of July "Iv July" (IV being 4 in Roman numerals). See Hebrew Alphabet for more information about using letters as numbers and why the number 15 is written this way.

As I mentioned in Rosh Hashanah, Judaism has several different "new years." This is not as strange a concept as it sounds at first blush; in America, we have the calendar year (January-December), the school year (September-June), and many businesses have fiscal years. It's basically the same idea with the various Jewish new years.

Tu B'Shevat is the new year for the purpose of calculating the age of trees for tithing. See Lev. 19:23-25, which states that fruit from trees may not be eaten during the first three years; the fourth year's fruit is for G-d, and after that, you can eat the fruit. Each tree is considered to have aged one year as of Tu B'Shevat, so if you planted a tree on Shevat 14, it begins its second year the next day, but if you plant a tree two days later, on Shevat 16, it does not reach its second year until the next Tu B'Shevat.

There are few customs or observances related to this holiday. One custom is to eat a new fruit on this day, or to eat from the Seven Species (shivat haminim) described in the Bible as being abundant in the land of Israel. The Shivat Haminim are: wheat, barley, grapes (vines), figs, pomegranates, olives and dates (honey) (Deut. 8:8). You can make a nice vegetarian pilaf from the shivat haminim: a bed of cooked bulgar wheat or wheat berries and barley, topped with figs, dates, raisins (grapes), and pomegranate seeds, served with a dressing of olive oil, balsamic vinegar (grapes) and pomegranate juice.

Some people plant trees on this day. In my childhood, Jewish children commonly went around collecting money to plant trees in Israel at this time of year.

In the 16th century, kabbalists, developed a seder ritual conceptually similar to the Pesach (Passover) seder, discussing the spiritual significance of fruits and of the shivat haminim. This custom spread primarily in Sephardic communities, but in recent years it has been getting more attention among Ashkenazim. Aish.com provides a traditional text for this seder.

Tu B'Shevat will occur on the following days of the secular calendar: 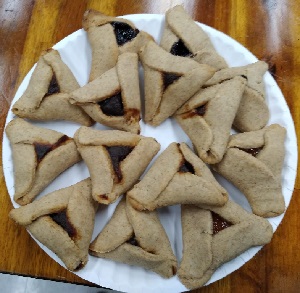 Next Holiday: Purim!
Learn about the Jewish holiday of Purim, from the Book of Esther. Includes a recipe for hamentaschen (traditional holiday cookies). 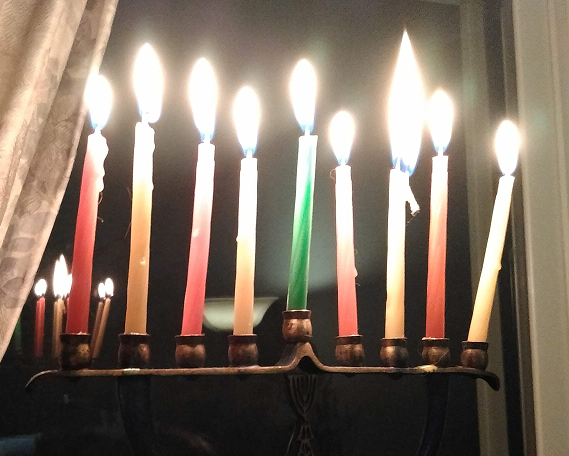 Last Holiday: Chanukkah!
Learn about Chanukkah, the Jewish Festival of Lights. Learn the rules for playing dreidel and a recipe for latkes (potato pancakes).