So let's focus on some foods you might want to eat for breakfast, lunch or dinner and some fruits and vegetables that are permitted. I will also provide a few substitution suggestions and a few recipes. But before we get started, a few words about finding Passover food in your local grocery store.

Pesach foods generally require special Kosher-for-Passover certification. Regular kashrut certification is not sufficient for Pesach, and many foods that are perfectly kosher year-round are not kosher for Pesach. Look for a "P" (not the word "pareve"!) to the right of the hekhsher, like the one at top right, or the letters KFP (Kosher for Passover) or KP, or the words Kosher for Passover in English or Hebrew, seen in the illustration.

In areas with a significant Jewish population, grocery stores often gather Passover items together in a single aisle. Be aware that some supermarkets are very sloppy about what they shelve in their Passover aisles. A supermarket near me routinely mixed the Kosher-for-Passover sardines (packed in olive oil) with the year-round sardines (packed in corn oil) on their Passover shelves, routinely restocked the Kosher-For-Passover soda pop display with regular soda pop and so forth. One year, they put some corn-syrup Purim lollipops in the Passover aisle. But then, what do you expect from a chain that once advertised a sale on "Challah: A Passover Tradition"? (the only Passover tradition related to challah is not eating it!)

To help you reorient your thinking, here is a list of things that you CAN eat during Pesach with minimal substitutions:

Most people will eat any fresh or frozen fruits and vegetables from the grocery store, as long as the vegetable itself is kosher for Passover.*

Vegetarians who eat eggs and dairy products are in luck: eggs and milk are kosher for Passover and do not require special certification if they are purchased before the holiday begins. Cottage cheese, yogurt, cream cheese and sour cream require certification, but several leading national brands routinely carry such certification. Hard cheeses (cheddar, mozzerella, etc.) are more difficult to find, but only because kosher hard cheese itself is difficult to find -- rennet that is used to harden cheese is a complicated kashrut issue. Kosher brands of cheese, such as Miller's and Les Petites Ffermieres, are commonly kosher for Passover.

Another exciting Passover protein option for vegetarians and vegans is quinoa, the new world grain-that's-not-a-grain. Quinoa is one of the best, most complete vegetarian sources of protein available. A recently as 2010, there was much debate as to whether quinoa was forbidden as kitniyot, like peanuts, beans and corn. More recently, major kosher certification organizations like Star-K CRC and Orthodox Union have written articles expressing support for quinoa as a Passover option. That's the good news; the bad news is, now you have to look for quinoa with Kosher for Passover certification! At one time, the CRC organization held that Ancient Harvest brand whole grain quinoa (not flour or flakes) was kosher for Passover without special certification, but I'm not sure if they still say that. Some have said that whole grain quinoa can be used but must be sifted carefully to make sure no forbidden grains have slipped in. Oh Nuts offers quinoa certified for Passover.

Two of the recipes on this page are vegetarian (though not vegan): matzah brie and matzah lasagna. I have prepared a PDF, Thinking Outside the Matzah Box, of 25 different vegetarian recipes that can be made for Passover. Many are (or can be made) gluten-free and/or vegan. Most are not traditional Jewish recipes but just vegetarian recipes that can get you through Passover. You can also look through an index of all the Passover and other recipes I've posted here.

As I said above, you should generally avoid substitutions and focus on foods that are naturally kosher for Pesach. That being said, there are a few simple substitutions that can give you more options for your Pesach cooking without compromising flavor.

Potato Starch
Potato starch can be used instead of corn starch or flour to thicken sauces, stews or gravies.
Matzah Meal
Matzah meal is ground up matzah in pieces about the size of bread crumbs. It is an effective substitute for bread crumbs to make breading for things like fried chicken or eggplant parmesan. In fact, I use it that way year round. It is also an effective substitute for bread crumbs or rice in recipes where they are used to hold ground beef together, such as stuffed peppers, meatloaf or meatball recipes.
Matzah Farfel
Matzah farfel is chunks of matzah about the size of a dime. It is a useful substitute for noodles, rice or pasta as a side dish. Serve your main course over matzah farfel and it will soak up the sauces nicely. It can also be used much like croutons on a salad, or can be used as the basis for a Kosher-for-Passover stuffing.

The ingredients specified for these recipes are all available with Kosher-for-Passover certification in the supermarkets near me; your mileage may vary. Make sure the ingredients you use are certified, as many of these things contain grain products when they are not KFP-certified.

There are many different ways to make matzah brie (usually rhymes with "rye," although some pronounce it like the cheese), and I will undoubtedly be branded a heretic for my particular technique, but this is the way I learned to make it and this is the way I like it. This recipe is really just French toast with matzah instead of bread! If you'd like something fancier, try my Creme Brulee Matzah Brei, but this recipe is very traditional and quick and easy to make.

Prepare the same kind of soaking batter you would make for French toast: beat a couple of eggs with some milk or water and some cinnamon. Break up some matzah into pieces about the size of your palm (precision is not required) and soak them in the batter until they are a little soggy but not falling apart. Fry them in butter in a frying pan until they are crispy. If you need to use up the last of the egg mixture, you can pour that into the pan with the last of the matzah.

Serve with honey (because it's hard to find syrup that is kosher for Passover -- most syrup these days is corn syrup). It's good hot or cold, so you can put your leftovers in the refrigerator and have them for lunch!

Once again, I will probably be branded a heretic for this simplistic brisket recipe, but it works well for me. I'm not sure of the quantities, because I don't make this very often and I go by feel:

Mix the ketchup and soup mix with enough water to get a smooth consistency (not a soupy one; about the consistency the ketchup originally was). Pour it over the London broil in a roasting pan. Cook at 325 degrees until it's done (depends on the size and shape of the meat). For more tender brisket, you may want to marinate it for a while before cooking.

This is the ultimate expression of a substitution mentality, which is exactly what I tell you to avoid throughout this page... and yet, I really like the way it tastes. It is my Pesach guilty pleasure. Basically, this is a typical lasagna with matzah substituted for the noodles and cottage cheese for the ricotta (because ricotta cheese is usually made with grain vinegar, though it's not called that on the ingredients list -- it's called catalyzer or something goofy like that). If you really want ricotta, it's pretty easy to make your own with this recipe!

☰ Links to Other Recipes

Elsewhere in this site, I have provided recipes for the following dishes which are (or can be made) Kosher for Passover:

...or review my Recipe Finder, which lists all of the Passover and non-Passover recipes I have posted on this site and on my blog. 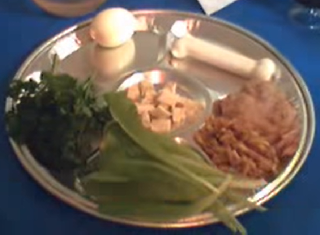 Pesach: Passover
Learn about the Jewish holiday of Passover, known to Jews as Pesach. Includes an outline of the seder (the family holiday ritual meal) and a recipe for charoset (a traditional seder food).