The etrog, a fruit used in the rituals of the festival of Sukkot, is not commonly seen in America. If you haven't participated in the Sukkot rituals, then you have probably never seen or held one. Even if you have seen one, chances are you haven't seen what the fruit looks like on the inside, nor seen the tree it grows from. This page discusses the etrog fruit and tree, with photographs of a whole and dissected etrog fruit, an etrog tree and its leaves, flowers and thorns.

☰ The Etrog Fruit: Inside and Out

The etrog is a medium-sized citrus fruit, with a color, scent and taste similar to a lemon. It is also known in English as the citron, though there is apparently more than one variety of citron. This variety is identified in scientific literature as the etrog citron. The etrog is used in the waving rituals of the festival of Sukkot, where the etrog is said to represent the heart (because of its shape), and also said to represent the ideal kind of Jews, who have both knowledge of Torah and good deeds (because it has both a pleasant scent and a pleasant taste). One midrash suggests that the etrog, not the apple, was the forbidden fruit in the Garden of Eden. Why, then, does the Western world think that the fruit was the apple? Perhaps because the ancient Greeks called this fruit the Persian apple, Median apple or golden apple.

A typical etrog fruit is oblong shaped, four to six inches long and has a bumpy rind. The Yemenite variety of etrog is larger, but looks quite similar. The etrog in the pictures on this page is the one I used during Sukkot in 2005, and is quite typical of the ones used in America. It is almost 5 inches long. At its widest point, it is 2¾ inches wide. Some etrogs have a narrowing in the center, like a waist, that is somewhat more green. These are commonly referred to as "belted" etrogs. Belted etrogs are valid for the mitzvah of the waving; in fact, some people prefer them. 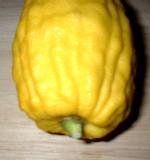 At one end of the etrog is the green stem that connects the fruit to the tree, seen in Pic. 2. At the other end, most etrogs have an extension known in Jewish tradition as the pitam, seen in Pic. 3. The knobby part of the pitam is the remnants of the part of the flower that biologists would call the stigma, the part that receives pollen grains during fertilization. It is somewhat rough to the touch in a mature etrog. The narrower tube-like area connecting to the fruit is the remnants of the flower's style. The fruit itself is the flower's ovary. 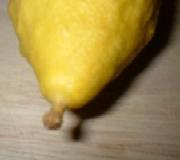 If your etrog has a pitam, as most do, then you must be very careful not to break it off during the course of the holiday. If the pitam breaks off, the etrog is considered to be damaged and no longer valid for performing the mitzvah of waving. However, if the etrog grows naturally without a pitam, it is valid. In fact, some people prefer pitamless etrogs, because you don't have to worry about breaking off the pitam before the end of the holiday! 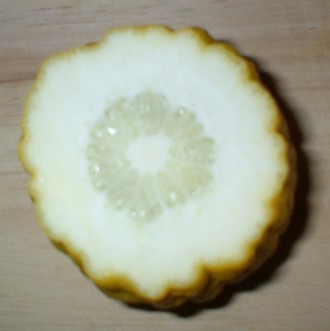 Pic. 4: Cross-Section of an Etrog

The etrog is surprisingly light in weight for its size, much lighter than you would expect for a comparably sized lemon. This is because the etrog is mostly rind, with very little pulp or juice, as you can see in Pic. 4 and 5. The ones I have used for ritual purposes are all like this, but there are probably ones grown for eating that have a higher fruit-to-rind ratio. The etrog also has a very large, dense core, unlike more familiar citrus fruits. Like most citrus fruits, the pulp area forms in segments, but the fruit is not easily separated into segments. The skin separating these segments is not pliable, and not easily separated from the core. Rather, the pulp must be scooped out from between the segments if you want to eat it. More likely you would simply squeeze out the juice. The rind is edible and is commonly candied. Note that most recipes for candied citrus peel tell you to remove the white part of the peel, but I usually candy that too, as most of the fruit is white part! 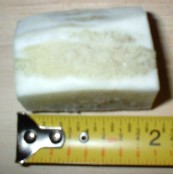 After I cut away all of the rind on this etrog, leaving as much pulp as possible, I was left with a block of pulp and seed that was barely 2 inches long and 1½ inches wide. Much of this fruity center is seeds; I harvested about 30 seeds from this etrog. The seeds look much like other citrus seeds, see Pic. 6 below.

The pulp is edible but quite sour, like a lemon. It looks much like any other citrus pulp, see Pic. 7 below, though the skin of the pulp is somewhat more dense. With diligent squeezing, you can obtain a tablespoon or two of etrog juice, too sour to drink but suitable for making a glass or two of etrog-ade! 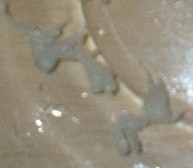 After Sukkot 2002, I planted the seeds from the etrog I had used for the holiday and one of the seeds grew into a tree. The etrog tree pictures on this page are pictures of that tree, which was an annual guest in my sukkah. The pictures show it as a two-week old seedling (Pic. 8), a one-year-old tree (about three feet tall) and as a two-year-old tree (over four feet tall). And a three-year-old tree. I was slow to realize that the tree was infested with spider mites (you can see the characteristic webbing in some of these pictures), and by the time I started treating the problem, it was too late. I've tried planting etrog seeds since then, but have never had as much success as I did with this one.

I will not presume to give any advice on how to grow etrogs from seeds, because I have very little gardening skill and my success with this one was mostly luck. I'm sure it is no different than growing any other citrus seed, and there are certainly better places to get that information than on this site! Two things I can tell you about caring for them once they sprout: don't overwater them (wait until the soil begins to dry out), and don't underfertilize them. 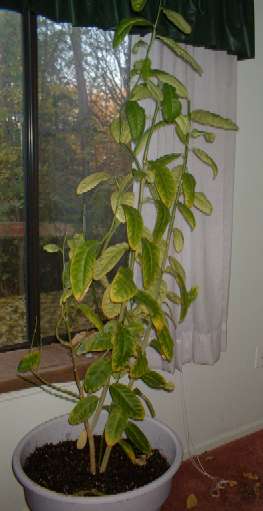 I gather that it is not unusual for an etrog or other citrus trees to grow multiple trunks, as this one did. For what it's worth, my second trunk developed after I mistakenly repotted my etrog tree at an angle during its second year. A new trunk started to grow out of the first trunk, growing straight up. You can clearly see the two distinct trunks, looking like two different trees, in the third picture above.

The etrog tree is an evergreen, which means its leaves should be green year-round, unless of course you underfertilize it or it's infested with pests, in which case the leaves turn yellow and drop off. Etrog leaves are large and oval-shaped, five or six inches long and two inches wide. They should have a rich green color. The one in Pic. 12 is yellowing a bit at the edges, but is otherwise a good color. They smell very much like Lemon Pledge furniture polish! Some people put the leaves in closets to repel moths. 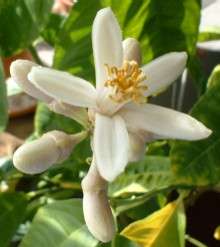 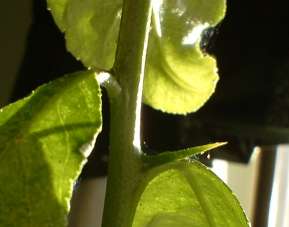 Etrog trees produce small white flowers, an inch or two across, that will eventually develop into fruits. Etrog trees are self-fertilizing, so you don't need multiple trees to produce fruits. However, if your etrog tree is indoors, without bees to transfer the pollen, you'll have to help this along. You can do this by shaking the branches near the flowers once or twice a day, or perhaps tapping the flowers with a soft paint brush to move the pollen around. This tree never successfully produced fruit, but I have produced other fruits from indoor plants this way. The flower picture above was taken in March 2005, when the tree was about 2½ years old, and was the first time I had noticed flowers on the tree. You can see that several other flowers are ready to blossom on the same branch.

Etrog trees also develop thorns, which are between ½ and ¾ inch long. They are quite thin and rather sharp, but do not possess any irritant properties. The thorns tend to grow out of the trunks or branches, usually near the leaves.

If you would like to learn more about the etrog fruit and tree and its history, Zaide Reuven's Esrog Farm has a great little book called The Etrog with lots of information, including tips for growing, and recipes. They also sell etrog seedlings, cuttings and trees. I confess, I did not have much luck with the seedlings I bought from them many years ago, but this probably has more to do with my lack of skill as a gardener than with their products: my etrog tree above is the most successful plant I have managed to grow, and I killed it within four years! They also sell other etrog-related products and other things related to Sukkot. 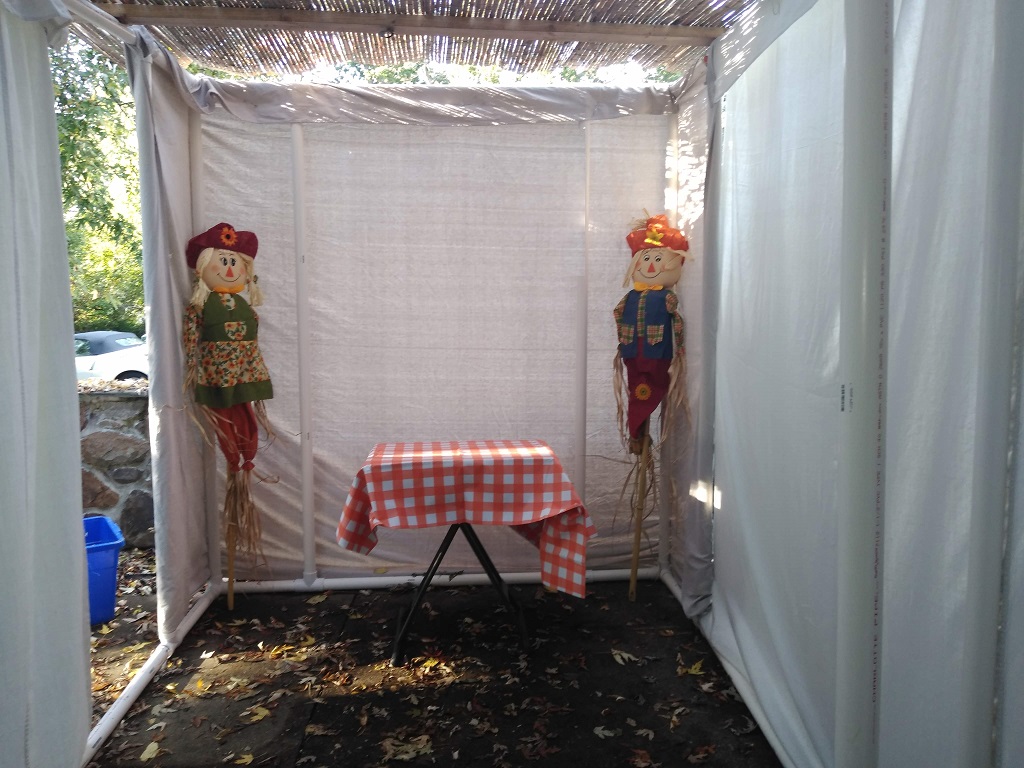 Sukkot
Learn about the very festive holiday Sukkot, also known as the Feast of Tabernacles. What child would not love a holiday that involves building a fort!

Sukkot Blessings
Some blessings for the Sukkot holiday, including Kiddush, blessings for dwelling in and leaving the sukkah, and for waving the four species, in Hebrew, English and transiterated Hebrew